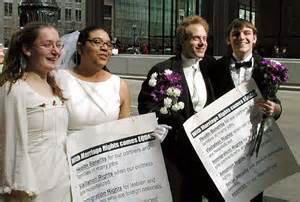 Gay marriage, sad marriage as they battle and grapple with who should have the right to marry, how about looking at the antiquated marriage laws that have existed for that many generations? I will give in to the politically correct, culturally enlightened liberals if they will concede this for the rest of us, to make the contract of marriage meaningful. You are required to do more to get a driver’s license than you have to do to get married today and the driver’s license comes with more responsibility. First the government should put meaning back into the contract of marriage. No one has to get married, they do not have to enter into such a contract sanctioned by the State, but if they do not, no associated benefits should be derived from the State, such as any tax advantages and all the other rights or advantages granted by the State to married people. The State should develop a contract that maps out all that is expected of a married couple when they agree to be married in the eyes of the State. That should include a basic prenup, detailing what financially is each party bringing into the marriage and how their finances be handled if they decide to divorce. Think of the problems this will avoid, the time and expense of divorce. The matter of children should be addressed, what is each persons responsibility regarding the children, how much support will each party be required to give, in or out of the marriage. There should be  a cooling off period where they would be required to attend or be privy to the necessary information that a marriage would require. Marriage counselling classes before they are allowed to marry, this would be a hard fought issues for the State to decide what information should be required in these classes, but it is better fought before the State sanctions a marriage than what exists today. Keep in mind that no one has to get married, but if you move in and sleep on someone’s couch, then worm your way into their bed, that is not a State sanctioned marriage and no State benefits would be accord either party. Living together only reduces living expenses, when you leave that possibly rent free situation you are back on your own, no one owes you a living before or after, certainly not the State, really not the person you bludgeoned  off of for that many years. If children are born out of wedlock the same laws will still apply. Any Gay activists, religious, anti-government or people who are into polygamy, want to add your opinions?