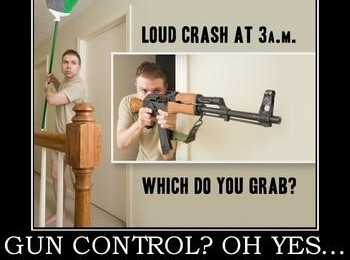 Kiss your 2nd Amendment goodbye, as comrade Bill Ayers’ theme song says, “You don’t have to be a weatherman to know which way the wind is blowing.” I’d say the wind is definitely blowing toward stricter gun control to the banning of all handguns and many long guns. The liberals are still in charge and are likely to remain a powerful influence in the USA. A basic tenant in their belief system is control of everyone and everything. Core belief: The government should do everything for you, or more particularly for all their downtrodden constituents. The storm on the horizon is Islamic Terrorism. When that storm hits the USA, they are only going to see terrorist with guns, not the people who may be able to defend themselves with guns, so they have a ready excuse to take your guns away. You think I’m Chicken Little crying, “The sky is falling!”? Connect the dots, an airliner is high-jacked by men with box cutters. Their response – make sure no one gets on a plane with fingernail clippers. Oh yes at, the first excuse, your 2nd Amendment is gone. If you want to continue to enjoy the ownership of firearms, for recreation and personal protection, I suggest you had better stock up while you still can.
The regulation of guns in France is categorised as restrictive, you know – the same as the USA.

In France, the right to private gun ownership is not guaranteed by law.

In France, private possession of semi-automatic assault weapons is prohibited with only narrow exemptions.

In France, private possession of handguns (pistols and revolvers) is prohibited with only narrow exemptions.