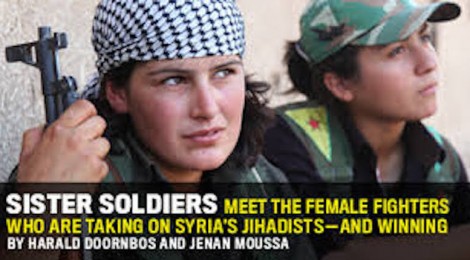 Kurdish Allies Sister Soldiers.  It seems the best possible allies in Iraq are the Kurdish people. They now allow their women to have combat rolls on the battlefield. That sounds very progressive, but consider this, they have little choice. The Kurds have been attacked and killed by every group around them. They are literally surrounded by enemies. Kurdish Allies Sister Soldiers, with the Turks on one side, every other ethic/religious group in Iraq on the other sides. These are not just enemies that want to subjugate and control the Kurds, their enemies want to kill every male Kurd and in-slave the females. Without the pressure of being completely wiped out, what values do the Kurds hold dear? The following video of the stoning to death of a Kurdish girl gives me some ideas of who the Kurds are. The Kurds or ISIS, what exactly is the difference? Kurdish Allies Sister Soldiers You Decide.