Browse: Home   /   Taking the Law into Your Own Hands

Taking the Law into Your Own Hands

Taking the Law into Your Own hands.   As a Retired Police Officer and Detective I know for a fact that the police are ineffective without the support of the public. I have made arrests that have led to successful prosecution of murders committed in affluent neighbourhoods but failed to solve easy to prove murders in poor neighbourhoods. This was not because of my lack of skills but due to the lack of cooperation in these poorer neighbourhoods.

I’ll tell you about two classic cases, one was an out-of-town tourist who was robbed and shot to death in the Nob Hill neighbourhood of San Francisco. No one in that neighbourhood knew any of the parties involved, but every witness cooperated fully with the police. The neighbours came forward and told what they had witnessed. It was these small pieces of information that proved very helpful in identifying the perpetrators and prosecuting them. For example;  one witness stated, “I heard shots at about 3:15 am.” Another witness said, “The car was a convertible, with a black roof and red body.” We assessed that a possible route of escape was 5 minutes to the Bay Bridge. Later in the investigation we got our big break, when information came in from various informers on the street as to who the perpetrators may be, then these perpetrators rolled on each other. The description of the car was also tied to the driver. It actually took a lot more work to arrive at solving this crime, a crime that would have never been solved without the help of the public.

About that same time period I had a case where a youth was shot during the day on a crowed “inner city’ street. A typical gang related crime. Most everyone knew the victim and the perpetrators. This was the result of a series of disputes that ended in this awful murder. One of the eyewitnesses was the victim’s uncle. Non of these witnesses would talk to the “poe-lice”. It was soon ascertained who all the perpetrators were, but without some co-operation from the public, no search warrants were possible to obtain and no arrests were made, but at least nobody got a “snitch jacket”.

This is exactly what is happening in Chicago, daily if not hourly as youths are shot down on the public streets. The bond between the police and the neighbourhood is broken in Chicago, so the criminals have free rein. No laws or gun control will ever bring order to a neighbourhood that does not support the police.

GANG I COULD SUPPORT

I am trying to get you to understand a very important principle of civilisation and in particular what makes the USA safer than other democratic countries, it is that the individual citizen is in charge of their own safety and uses the police to ensure that criminals do not rule their lives. 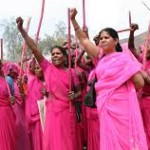 I SUPPORT THE PINK GANG

My feeling is that anyone make this type of statement that citizens should not be taking the law into your own hands.  These people have not spent much time working with the public in trying to solve crimes and make arrests. Also understand who these high ranking law enforcement officers are;  they are people who owe their positions to liberal politics.

If the police or these type of politicians who govern break that bond with the people giving the impression that only the police should enforce the law; this type of society is going to be ruled by criminals. Look no further than Mexico, Columbia, India, you name the garbage pit and you can see clearly why this is the case. When the government takes total control of your life in this way, they will then insist that you pay them for the privilege of living under their control,  and they will also be paid by criminals and allow them to commit crimes.

NOT A GANG TO SUPPORT

This is not only my opinion; this has been my experience and observations.

View video, how many times do you think this company will be robbed in the future?  POLICE PUBLIC COOPERATION

Tags: gangs, police, taking the law into your own hands